On the 26th of January 2016 I unpacked The Forge archive in the MA in Art & Process studios, CIT Crawford College of Art & Design Sullivan’s Quay Campus, Cork. This would be the final act of my graduate residency, which ran for 12 months. I would have liked to be at a stage in the project where I could exhibit elements of the archive alongside some artwork created in response, however the year flew and I was mostly caught up with work. The 2015 MA students had just packed up the last of their belongings and artwork mid-January and I hoped to be out of the studios before the end of the month. More work commitments emerged and before I knew it I had reduced my ‘exhibition’ down to one day (10am-9pm). I used the opportunity to see  all the archive laid out simultaneously for the first time. To date I never had enough room. I frequently opened a box and took things out but would always have to pack it back up before opening another. 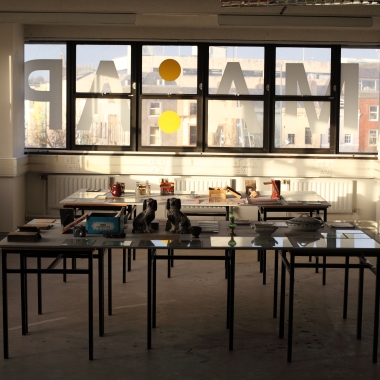 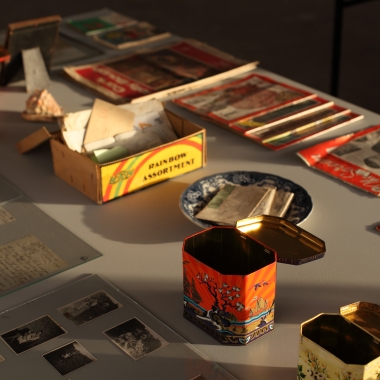 I could now assess the entire contents of the archive and begin to decide my next course of action. There were already germs of ideas that been developing over the years since the project came into being in 2005, but I was also hoping for some new inspiration. As the studios have limited access and the notice was extremely short I only invited local artists, archaeologists, a few friends, family and other interested parties who had been following the project. I called it an Open Archive event rather than an exhibition. 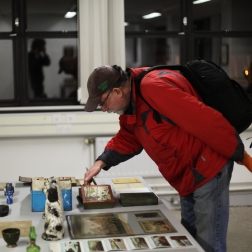 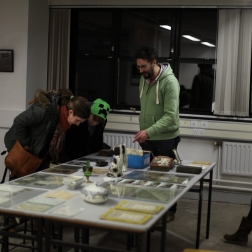 The speed at which I curated and installed the archive in the space turned out to be quite helpful. I made decisions quickly, intuitively and often in a very playful manner. I followed the lead of the Buckleys in some cases. Their choice of box for certain items remains unchanged, however I curated new assemblages in new boxes based on colour and tone. For example holy medals were placed in a tin with a red paper lining.  Two war medals and a car key were added due to visual rather than categorical similarities. Time pieces were given their own box. The two items from the forge found a new home in the family safe box. Drinking and smoking products and paraphernalia were presented together.

The wooden frames that would have mostly held holy pictures are one of the most bulky items in the archive. I had no interest in presenting all the holy pictures framed on the wall so having lined up the frames to assess their condition I just left them as they were. The holy pictures were laid out on the ground. Four holy pictures that I had reframed/restored were hung throughout the exhibition. I concentrated most of the holy statues and figurines in a wooden box. I used the glass from the empty frames to cover and flatten some of the documents, letters and photographs that I had laid out for viewing. Large improvised tables were made from desks and two large sheets of mdf and painted grey to provide a suitable background. The glass acted as a kind of barrier between the archive and the viewer as would be the case with a frame or a vitrine, however each visitor was told that the glass could be removed if they wished. Everything in the archive could be touched and handled, unlike in a museum or gallery. Latex gloves were provided to protect the visitor from the dirt on the archive, not to protect the archive.

The neutral space of a former government building open plan office created an atmosphere of its own. Although the installation was naturally influenced by my experience installing art exhibitions it was free to exist outside any associated conventions. There were no labels, artist statements or leaflets. All the information came from the archive or directly from me as I was always there in the space to answer any questions or engage in discussion. I was curious to witness reactions and hear people’s thoughts on the archive and the project. Everyone that visited related to the material on some level, some recounting stories of their own regarding family archives, others had second hand accounts of time capsule situations. 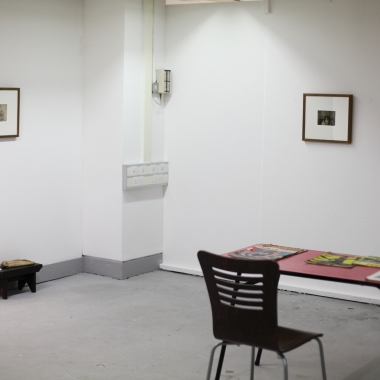 I also presented a video projection featuring footage taken by my friend Paul Bloom on my second last visit to the house in 2005. I interspersed some photographs taken during the official visit and subsequent unofficial visits sanctioned by the owner. The video provided a record of the discovery to compliment the archive on display and in doing so became part of the archive.

As you may have seen in previous blog posts many items in the archive will be gifted where appropriate. I had not advertised this widely as I wanted to observe an unprompted covetous reaction in the viewer. I could then choose them as a suitable custodian for the item in question. In some cases there may be destructive artistic intent which is also acceptable should I not wish the item to be preserved. There are some parts of the archive that I will hold on to myself. 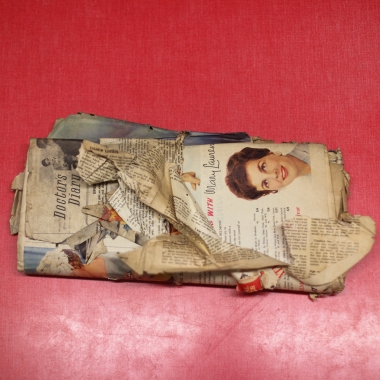 I also took an opportunity to unravel three bundles of magazines that I had found in the house. They had been wrapped in string. I enlisted the help of a friend and documented the unravelling. I had always wondered why someone would create the bundles. Were they to be burned like a log or were they indicative of some form of strange obsessive behaviour associated with the onset of dementia? The bundles date to the early 1960s. Jim died in 1966.

Having been told that Kathy attended a performance of the opera Il Tavatore at Cork Opera House I chose to play it on loop in the background. It added to the atmosphere and seemed entirely appropriate. Overall the exercise of displaying and sharing the archive was very beneficial in informing my future plans for the project. I intend to further reduce the physical presence of the archive through gifting, destruction and the generation of artwork. All actions will be documented. 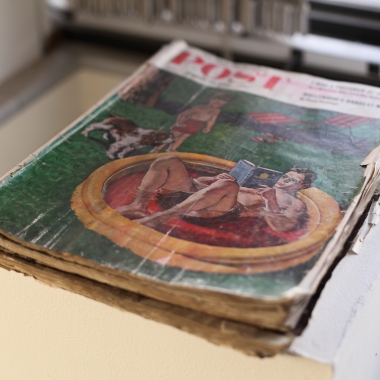 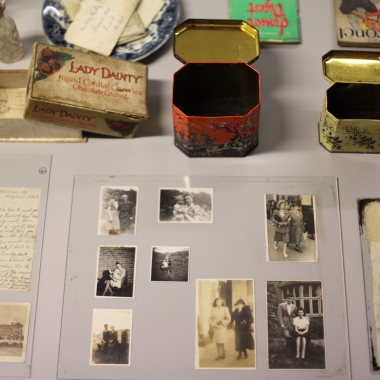