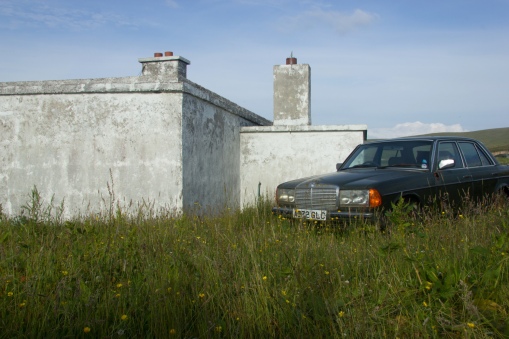 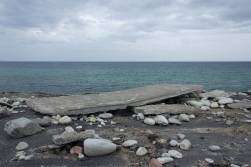 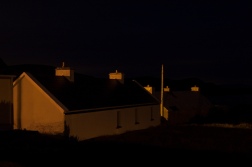 After Paul Henry is a collaborative project by photographer and archaeologist Brian Mac Domhnaill and painters Gentian Lulanaj and Paul Mc Kenna. Paul Henry (1876-1958) is Ireland’s most celebrated landscape painter. His depictions of the west of the country in particular have become synonymous with a romantic view of Ireland: unspoiled and traditional. Apart from the universal appeal of the images there is also a real sense of an artist engaging with a landscape and delighting in its drama, textures and hues.

The After Paul Henry project was conceived out of a shared admiration for the work of the artist and a desire to seek inspiration within the spectacular landscapes of Achill Island and Connemara. The aim of the project was to follow in the footsteps of the artist and his wife and to engage with the people and the landscapes they encountered, taking stock of what has changed and what has remained the same. The locations of Paul and Grace Henry’s paintings were researched and identified by Brian Mac Domhnaill using exhibition catalogue entries and images, written accounts by the artists and historic Ordnance Survey Maps. The resulting body of work by the three project artists featured a diverse series of interactions with both the work of Paul Henry and his subject matter.

After making some initial paintings capturing the contemporary landscape of Achill Island, Paul Mckenna instead focused on producing a series of still life paintings of individual weathered and worn plastic objects collected from the beach at Dookinella. Albanian national Genian Lulanaj first visited the National Gallery of Ireland in 2000 and was immediately captivated by the work of Paul Henry and his personal and professional history. Lulanaj’s body of work from the project reflected his hopes for an unspoiled landscape rather than the slightly tainted reality encountered.

Brian Mac Domhnaill focused on subjects that reflected a new vernacular. This included the flat roofs of Dookinella made with shuttered concrete in the 1950s or 1960s. The result is a village with numerous examples of hacienda or villa style houses and bunker-like outbuildings, some with sloping roofs and ventilation holes near the eaves. There is a relatively new practice of stacking turf in animal feed bags on the bog as opposed to the tradional bare heaped stacks romanticised by Paul Henry. Also of interest were alternative cloud formations to the cumulous form preferred by Paul Henry and the swathes of white exposed at the quartz quarry. Finally a series of photographs were made at night in Dooagh using the orange street light as a reference to the paintings made there by Grace Henry under moonlight.

The project, which included numerous fieldtrips, began in 2013 and concluded in 2015 with an appearance on the television series Creedon’s Wild Atlantic Way (RTE) and a subsequent group exhibition at the Grainstore, Ballymaloe, Co. Cork. The artists also made a presentation in 2017 as part of the Summer Exhibition Lecture Series (Jack B. Yeats and Paul Henry: Contrasting Visions of Ireland), The Hunt Museum, Limerick.